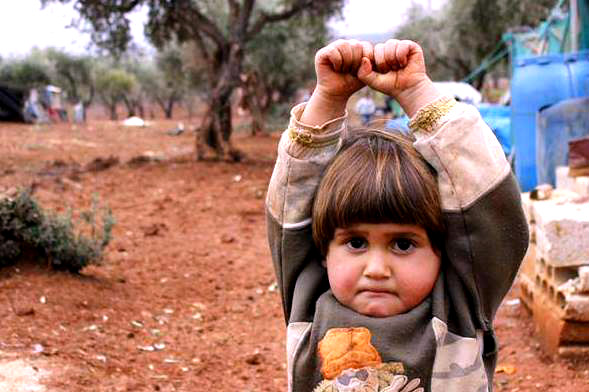 Syrian girl thought the photojournalist was holding a weapon, so she "surrendered"

It is one of the heartbreaking realities of war.

In this poignant photograph shared by Nadia AbuShaban, a Syrian child raises her hands in the act of surrender after seeing the camera, thinking it was a weapon!

I wish I could hug this child and whisk her away from the war…soothing her fears away.

How many are like her? Innocent lives who shudder in fear at anything unfamiliar to their eyes because it could be a weapon…

photojournalist took this photo 4 Syrian child, thought he has a weapon not a camera so she Gave up ! #Surrended pic.twitter.com/bm1hOWQWJY

No child deserves to live in fear, yet this child is constantly in fear – just like countless others in her community and in other war-ravaged areas.

For years, war has caused much pain and suffering to the citizens of areas like those in the Gaza Strip in Palestine, Ukraine, Cambodia, Iraq, etc.

War is seen as a necessary means to an end yet who really dictates whether war is good or bad?

Why can’t we just all live in peace?

When will these wars end?

Millions of people are suffering daily because of wars – not just the direct victims or the displaced residents in the war-torn areas but also the families of the soldiers who are deployed in the field.

The displaced families lost their homes and might forever live in crowded, unsafe refugee camps where they are prone to mental, psychological, and physical illnesses.

They suffer sleepless nights, out of fear that air raids could rob them of their children or even of their own lives.

They live days of constant alertness, just in case the fighting escalates and they are forced to flee again.

With hundreds, even thousands, of armed men patrolling nearby areas, these refugees often fear what the next minutes could bring – because it could be their last!

Meanwhile, the families of the soldiers also live in fear for their loved ones in battle.

Many of these valiant soldiers come home in caskets after perishing in the wars.

Though they are brave in the battlefield, the soldiers also suffer in their predicament yet are too valiant to complain.

After all, they were taught to “obey first before you complain”.

In war, everyone is a victim! But it is innocent children, like the child in this viral photo, who often suffer the most.

Today, let us all pray for peace…

This Woman’s Bikini Photo Goes Viral for the Most Surprising Reason
Explore Carnaúba dos Dantas, The Majestic Attractions in a Beautiful Town of Brazil