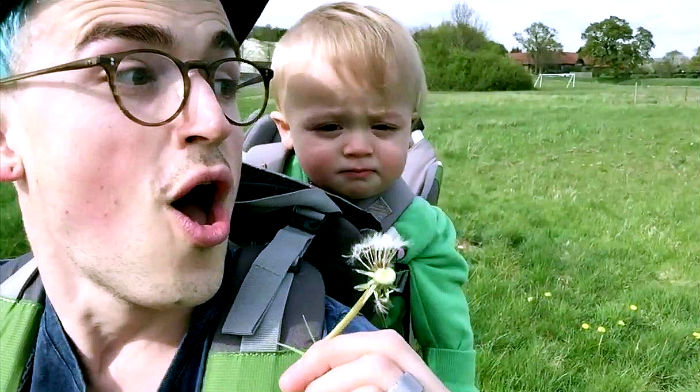 Watch: Tom Fletcher and son bond in ‘Buzz and the dandelions’ video

Laughter is the best medicine. This is a universal fact that all of us would agree.

It is a feeling amidst sometimes temporary that erases all the worries and hang ups we had in our respective lives.

Laughter can be triggered by many things. Most of which are simple little things.

It may be a memory, an act of kindness, a surprise or perhaps from and infectious laugh or happiness from others.

A true full blown, all out and uncontrollable laughter by a youngster however is in fact irresistible and infectious and in a way can make anyone’s day and can turn any scrunchy pout to a huge smile.

It can surely brighten a cloudy day anytime.

A video posted by a father on Youtube of an adorable little boy joyfully entertained and laughing uncontrollably of a dandelion his father is blowing – a great example of an infectious laughter.

The video was posted by the English singer and song-writer Tom Fletcher of the band “Mcfly”.

The cute little boy is his son Buzz. The video captioned “Buzz and the Dandelions” is now viewed almost a million times on Youtube.

“This is why being a Dad is awesome. This is the first time my son Buzz has ever seen a dandelion…I think he liked it”, Fletcher wrote.

In the video, Fletcher is carrying little Buzz on his back then he holds up a dandelion.

Making sure his son got his attention he then blows it. At first we can hear Buzz’s adorable little giggles then it blows out to a full blown belly laugh.

Surprised by his son’s reaction, Fletcher finds another dandelion then blows it and again little Buzz keeps on laughing seemingly fun of the flying flowers he just discovered.

“Can’t believe over 13 million people have seen the video of me and Buzz over 24hrs. That’s lots of peeps thanks”, he twitted.

This definitely made my busy Monday! Nice one little buddy!