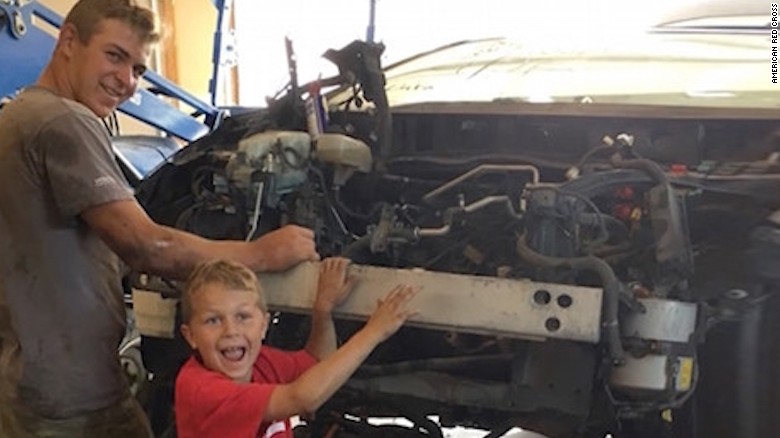 If you don’t believe that angels are amongst us, then this real life story might just change that.

An 8-year-old boy who only weighs 50 pounds just did something unimaginable; he lifted the car off of his father, by jumping up and down on the jack, to save him from being crushed. When he was asked how he did it or where he got the strength by that time, he simply said ‘angels’.

J.T. Parker, his 17 year old brother Mason and their dad Stephen were fixing the family’s car when the accident occurred. Seconds after Mason left the garage to tend a cut on his hand, the car collapsed, pinning and crushing Stephen underneath.

“We were pulling the engine out of the car, and after we got it jacked up, I climbed under there to take the axles off,” Stephen recalls. “The one axle came off pretty easily, but the other side wasn’t coming off.”

He was about to adjust the axle and move the jack a bit but all of a sudden, the car fell on him.

“I yelled to J.T. on the other side of the car, ‘Jack it up quick! Jack it up quick!'” Stephen said. “I couldn’t move at all. I was totally trapped, and then I passed out. It was all in his hands, and I thought, ‘This is it. There’s no way he can jack up this car because it took my 17-year-old son and I both to jack it up the first time.'”

Although he was frightened by the whole scene, little J.T. remained calmed and adjusted the jack and immediately jumped up and down on its handle. J.T. didn’t stopped jumping until he saw that the car has risen off of his father.

‘I didn’t think that I could jack the car up, but I just kept on trying’, eight-year-old JT Parker

“It was scary, and I didn’t think that I could jack the car up, but I just kept on trying,” J.T. said in one interview.

After the car was lifted off his dad, he quickly ran to Mason, who called 911.

In the 911 call recording, Mason can be heard telling his father that he needs to keep on breathing.

“I can’t,” his father responds.

Stephen was in critical condition when the help arrived. He was immediately taken off by a helicopter to Eastern Idaho Regional Medical Center for treatment. After several scans and check up, doctors found out that he had 13 broken ribs, but miraculously, no internal damage.

Once he was out from the hospital and returned home, he asked his son, J.T. to jack up the car once again the way he did it to save his life. But the little boy can’t do it anymore as according to him, the ‘angels’ are not around to help him this time.

Their mother believes that everything was pure miracle. “This whole thing is a miracle. There’s no other way to describe it,” said Jodi Parker. “There’s no way that little boy could have done that. I just felt that it was a responsibility we now have to tell people that miracles still exist.”

No words to explain my feelings…❤️😍💪🏻😭! Thank you East Idaho News.com for putting together a professional clip of our miracle. #angelsamongus #godisincharge #miraclesexist

If this doesn’t prove that miracles do happen and angels are living amongst us, then I don’t know what else will.

#HURTBAE: The viral video that offers painful insight into aftermath of cheating
Wow, this bright student gets accepted by all 8 Ivy League schools!