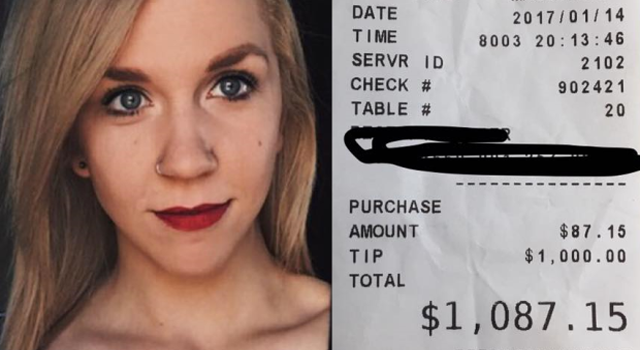 When a Winnipeg server saw that the receipt showed a whooping $1000 tip on $87 bill, she initially thought it was a mistake, but to her surprise, it’s real!

Jennifer Peitsch lives paycheck to paycheck and has to work two jobs a day to get by.

By day, she works at a food stall in Stonewall and at night she works as a waitress at Mongo’s Grill on Regent Avenue, Winnipeg Manitoba.

She doesn’t usually work on Saturdays night but when she was told to fill-in for a co-worker, she had no choice but to work that faithful evening.

It was a busy night at the Mongo’s and there are lots of customers waiting for their food to arrive. Jennifer admitted that she feels like she was falling behind at that time.

“Unfortunately, the rush, it was very busy. I felt myself falling behind. I didn’t want to let any of the guests down. I actually had to let some of the co-workers know that I needed some help at the time.” Jennifer Peitsch said.

A woman with three teenagers was seated on a table in her section of the restaurant.

Jennifer said that despite the waiting time, the woman was so patient and kind as she rushed to fulfill their orders and bring out food to their table.

But that’s not the only reason why she remembers that table (the woman and the 3 teenagers) and why she would never ever forget that moment.

When they are done eating and it’s time to pay, Peitsch checked out their bill and was surprised on the printed numbers.

“I saw the receipt come out of the little machine and it said a lot more than their bill was. So I automatically kind of assumed, ‘Hey, you kind of made a mistake here. You may want to re-look at this.'” Peitsch said. To her surprise, the woman said that what was printed was correct and the $1,000 tip was all for hers.

She can’t help her feelings that moment and burst into tears before giving a warm hug to her customer.

That uplifting moment was so overwhelming for her, making her to forgot to get the name of the huge tipper.

In her quest to know the name of the kindhearted woman and to thank her more, Jennifer posted her story on Facebook.

And after being shared numerous times, the post finally reached the woman – Lisa Julia Holgate.

Jennifer has been trying to save up money for her education but her credit card debt is taking her will off.

But with this huge tip, he was able to pay off his credit card and can start saving money for her own future.

“Now that I have that [credit card] taken care of I can finally put money aside and get my future going,” Peitsch said.

Working in a restaurant is all about patience and hard work. For Jennifer, it seems like her positive attitude paid off.

Keep your head up and always treat every family member, friend, acquaintance, coworker, and stranger with respect. It may come out to help you one day. – Jennifer Peitsch.

(via CBC.CA, Winnipeg Sun, The Globe and Mail)

China’s 80-year old: World’s oldest male model is a living proof that age is just a number
Tom Hiddleston Finally Revealed The Truth About The “I Heart Taylor Swift” Shirt‬