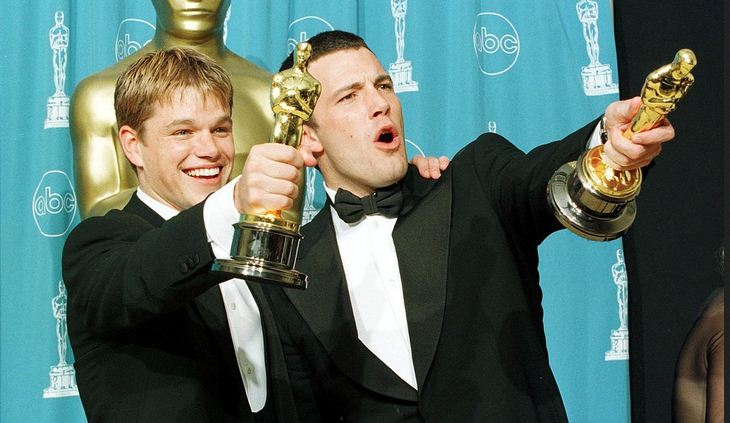 Best Original Screenplays of All Time

Ben Affleck and Matt Damon when they won for best screenplay. (expressingmotherhood.com)

The Film Academy’s awarding season has just arrived with the red carpet on the roll for the biggest annual award giving bodies – Golden globes and Oscars. A lot of factors can contribute in making a film excellent. These may consist but not limited to cinematography, musical score and of course the professionalism and acting skills of the actors and actresses. We must not forget that films are basically stories which are told in an audio-visual experience.

That means to say that not only the factors mentioned above are necessary, but most importantly is the story itself which is portrayed through a screenplay. Most screenwriters know that a good screenplay plays a very vital role in creating successful and outstanding movies. Below is a top 10 lists of the best original screenplay of all times.

This movie actually got nine Academy Awards nominations. A lot of people consider this to be the best of all time. The film narrates the story of an American dream. Charles Foster Kane (performed by Orson Welles, who serves as the writer- together with Herman Mankiewicz- producer and director of the said film) was a newspaper man focused primarily on a true to life journalist named William Randolph Hearst, who as a result of the movie’s launching stopped it from being identified in any of his newspapers.

Casablanca is very ideal kind of incomparable writing, acting and music. The movie was arranged in World War II and was launched soon after the correlated attack of North Africa and the invasion of Casablanca, Morocco. Director Michael Curtiz’s film presents almost every detail or feature you would want to see in a movie. It happens to be a story of romance and comedy coupled with suspense, and it features the worst men of all time- the Nazi’s.

Sunset Boulevard was directed by Billy Wilder and written by Charles Brackett together with Billy Wilder. It was an American movie filmed in 1950 about the endeavor and pure hard work of a vanished celebrity to entrap an innocent down-on-his-luck film writer into her illusion wherein she hopes of getting a successful come back to the movie screen.

An undeniably perfect work of art starring Anne Baxter, Bette Davis and Celeste Horn. Typically recommended as one of the movie industry’s significant accomplishment. This movie features on an old stage actress who requires an excessively enthusiastic fan under her wing.

Some Like It Hot is an extraordinary funny film, genuine classic movie that has been nominated the best comedy film by the American Film Institute and is among the most favorite and profitable movies of all time. It is indeed perfectly produced, skillfully scripted and excellently directed and acted and generally categorized as the “Perfect” comedy movie.

Francis Ford Coppola’s blockbuster movie was influenced by Mario Puzo’s novel, Marlon Brando starred the role and shared the story of a Don’s youngest son named Michael (played by Al Pacino)and his popularity with great power and influence being the head of the New York based influential family. His rise is indeed among the intriguing and interesting individuality in the film’s history. In the onset of the film, Michael is a university student coming from a World War II, who has no interest in their family business. But right after his attempt on his father’s life, he eventually turned out to be a very brutal gangster his own father desired he would never become.

Soon after the impressive success of The Godfather, many people demanded for another gangster film. With a whole lot more interesting scenes already filmed, director Francis Coppola partnered with Mario Puzo to compose a screenplay that opposed the rise of Vito Corleone as he put together his group and obtained vengeance on those people who slain his family. The original story of aspiration and family respect pave the way to a story of cruel battle for total reign in the Mafia.

Chinatown is an excellent, modern day, blockbuster movie. There were many awards for this exceptional film, consisting 11 Academy Award nominations, despite the fact that only one got the Oscar home, Best Original Screenplay for Robert Towne’s excellent masterpiece.

This movie was directed by Sidney Lumet. It is very impressive criticism about television journalism in which entertainment’s worth and temporary ratings were paramount compared to excellence. Paddy Chayefsky’s commentary regarding nasty corporate activities is an informative disapproval of the intense and violent crave for ratings by media-still happening up to now.

Annie Hall is recognized by Time Magazine’s Woody Allen’s (director) as a movie that created a turning point in his career. It won four Oscar awards which includes Best Picture. What made this movie prominent was its influence on a romantic-comedy genre.